Barbarians burning libraries. What seemed like an episode from the history books became a steamy reality on 23 July in Ciudad Rodrigo (Salamanca, 12. 500 inhabitants) in a self-managed library. The flames devoured the hundreds of copies that had been read by people perhaps with no other link than the literary one. Anyone could access this small brick building to exchange books, always respecting their return, until the news of the fire shook them. The illusion has finally returned this Wednesday, two months after the attack, with a new library, remodeled and with thousands of volumes donated by the world of culture: from great authors or publishers to anonymous readers.

Those Scorched walls and pages have been transformed into a white space, with wooden shelves that welcome those expressions of solidarity that began to arrive as soon as the outrage spread. The health situation has kept it closed, despite being concluded a few days ago, so users have had to content themselves with peering through the window at some of the titles. The upper part of the windows reflects a declaration of intent, with colorful references to key figures in the letters, such as Rosalía de Castro, Almudena Grandes, Miguel Delibes, Antonio Machado, María Zambrano or Miguel Hernández. The result moves Virginia Mota, whose message on Twitter in July triggered the solidarity effervescence. The “sincere joy of the people”, he says, has caused him not to know how to thank so much involvement.

The return of the bibliocaseta makes Aldea social center proud, a project that was born in 2012 to promote the cultural life of Ciudad Rodrigo and that in 2016 made the leap to this space , in a central place in the Salamanca town, which despite this has already suffered damage and burned books shortly after starting to operate. Antonio Pérez Solórzano, its director, points out that the self-managed center has not opened until the regulations required 414 hours of quarantine for each item loaned in libraries, something uncontrollable in this model. The Mirobrigense continues to be surprised by the magnificent reception of the request for help that they launched in the summer: “We are collapsed, hoping that they do not leave even one and we can be replenishing.” Even the schools in the region have benefited from this altruism, as Aldea has given lots to rural schools.

There are not so many days between these two images that jump in a second from sorrow to joy.

those who have helped to reopen the library. pic.twitter.com/RqMRvDhUEx

“People are delighted, they were waiting for it” , comments on the expectation generated. The first morning of the new era has been starred by retirees, the most common public in the booth during working hours, who soon have occupied some chairs and tables installed by the City Council next to the construction and have begun to turn pages. After the “simple act” of reopening, Pérez Solórzano has recommended to the Councilor for Works, Ramón Sastre, Don Quixote 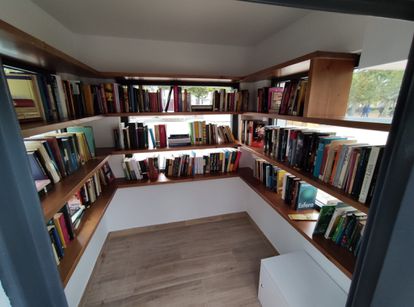 , by Miguel de Cervantes, “essential” for any reader. The manager of Aldea celebrates that the reception has been triumphant even in the town’s bookstores, with whom “there is no rivalry” and who have also collaborated: “They believe in the concept that the more you read, the better.”

Nobody in the association knows how to calculate the number of volumes received for fear of falling short. The more than 760 received emails in July they were answered one by one and there were even offers that had to decline because they could not send pickup trucks for people offering hundreds of books. The works have been paid by the City Council (PP): according to council sources, 6 have been invested. 000 euros to rehabilitate the library and another 1. in adapting an old kiosk nearby to to house more copies in case the original does not fit. Pérez-Solórzano values ​​the social involvement: “If not, you don’t set up a beach bar like that.” Some “mindless” will have to grab a lighter, he admits, but trusts “in the goodness of the human being.” For now, the premiere has lit the flame of illusion.

Aldea has used in its social networks a reflection of one of the writers whose work awaits readers in the library, Irene Vallejo, to illustrate this new stage: “Every time we have awakened (…) from the nightmare of our human catastrophes, the book was still there.” Some of the first to fly off the shelves have been Red Queen , by Juan Gómez Jurado, or The Angel Game, by Carlos Ruiz Zafón, who died little more than a year. The latter, which deals precisely with fantastic libraries and the passion for writing, leaves phrases like “there are those who prefer to believe that it is the book that chooses him … Destiny, so to speak”. From this Wednesday, the residents of Ciudad Rodrigo who come looking for books will be able to stop to meditate who has chosen whom.

“Lessons from those who rule with those who claim dictatorship, none”

Positive or negative? Young people who start working today will have 7 job changes on average in their lifetime, 4 of which are involuntary