The San Antonio volcano visitor center, located in one of the southernmost points of La Palma, is dedicated to disseminating the history and science of volcanoes. But on two of its large screens, educational documentaries or archive recordings of the Teneguía volcano are no longer broadcast as they were until a few days ago: now they show images of the eruption that is devastating part of the island; The disclosure is current.

In that center there is a more important change: for a week the most advanced instruments have been installed there to make a scientific marking of the smoke plume that escapes from the volcano . This makeshift station, with teams arriving from the Izaña atmospheric research center, next to Teide (Tenerife), has not detected emissions that are dangerous to health, as pointed out by its director, Emilio Cuevas: “The concentration of gases has not produced a worsening of air quality, ”he says. In addition, thanks to these measurements, they will be able to monitor and calculate the evolution of that gray column that stabs the heart of the island.

Izaña’s chief of systems, Ramón Ramos, was the first to landing at that point on the island, which seemed ideal for observing the emanations that arise from Cumbre Vieja. “We have raided the cafeteria, we have it closed, and the day they want to use it … we have a mess,” jokes Ramos. There he installed his small control center for computers and other tools; Scientific instruments monitor the plume from the roof and the visitor center parking lot. “At the beginning of the eruption we saw the need and the opportunity to try to monitor the volcanic plume [columna]: the size, the distribution, the compounds, in the simplest possible way. On Sunday we decided, on Monday we uninstalled Izaña’s instruments and we came the same Tuesday; at night it was already operational, ”says the researcher. These three advanced devices analyzed the atmosphere at the Izaña observatory, which belongs to the State Meteorological Agency (AEMET). 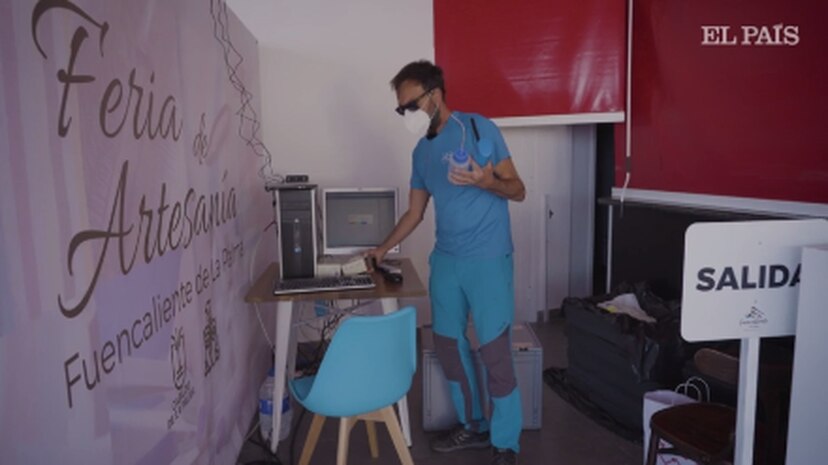 In video, space of the cafeteria where the scientists. Luis Almodóvar

All that instruments that traveled from Tenerife to La Palma have surrounded to the plume: to the south, in that volcano visitor center, they analyze the concentration of the particles that the volcano is injecting into the area , if they are thin or thick, and the amount of gases (such as carbon dioxide) that it contributes to the atmosphere. They also have a ceilometer, a kind of laser cannon that points to the zenith, vertically towards the sky, and which was initially developed to calculate the height of the clouds, but which reads what it locates: “It serves to calculate the profile of the air mass that we have above, and thus we can estimate the amount of volcanic plume ”.

The emission of gases and ashes exceeds 4. 000 meters high on some days, so they can be transported long distances by the circulation of the winds

At another end of the island, in Tazacorte, to the west of the outbreak, another AEMET station measures the air quality of this populated area, especially the concentrations sulfur dioxide on the surface, which is one of the main gases emitted by the volcano and which, in high concentrations, can be harmful to the population. Omaira García, Izaña researcher, explains that since its installation on 24 September “ the concentrations recorded have always been within the normal and expected thresholds (below 10 micrograms per cubic meter), although point and short-lived peaks of up to 65 have been recorded due to recirculation phenomena in the valley ”.

The emission of gases and ashes exceeds 4. 000 meters high on some days, so they can be transported long distances thanks to the circulation of the winds. As García explains, “at the Izaña Atmospheric Observatory, at 2. 400 meters above sea level , point values ​​of 1 have been recorded. 000 micrograms, when they are normally almost nil ”. This toxic gas affects the Tenerife summit more than the palm population. Cuevas details that on Sunday there was a small increase in surface values, but within the margins that are not harmful to the population.

“The values ​​are surprisingly low”, summarizes Cuevas . These stations support the device deployed by the Island Council of La Palma and the Government of the Canary Islands to verify in detail the air quality throughout the island, also supported by a surveillance system of the Military Emergency Unit (UME). “The values ​​are low at all points, also those of the UME in Los Llanos and those of the Canarian government in El Paso”, adds the director of Izaña.

The concentration of particles in Suspension emitted by the volcano “does not stop increasing”, Cuevas points out, but only in high layers of the air column: “It does not affect health. But it will help us to know how a volcano contributes to the concentration of aerosols in the atmosphere, to do science “, he summarizes.

The station installed in the south of the island aims to provide information vital to predict the evolution of the volcanic plume because it is instantly indicating the amount of emitted particles and their distribution. But for now “we have not had much luck,” laments Cuevas. The station indirectly observes the volcano’s emissions, although it has not yet had the plume above to dissect it as expected. “At that point there are the ideal conditions to observe it, because the normal thing is that the wind moves it to the south and that place is clear. But we have been abnormal for a few days, ”he laments. This change in the winds caused the east coast of the island to fill with ash, where the airport and the city of Santa Cruz are located.

Black hole news: Many black holes in Star Cluster: the discovery of a black hole in a cluster of stars

The use of zinc in the diet can increase difficulties, can lead to prey. – Whidbey Daily News